The equity and bond markets ended a volatile week last week in a somewhat optimistic mood.  Once again, trade and geopolitical events took center stage as the markets posted another week of losses.  On Wednesday, recessionary fears drove an 800 point (3%) decline in the Dow Jones Industrial Average, its biggest selloff of the year.  The equity markets fell in reaction to a yield curve inversion (that is, when the yield on the 10-year U.S. Treasury Note  fell below the 2-year U.S. Treasury Note for the first time since 2007).  Historically, an inverted yield curve often,but not always, acts as a precursor to a recession or stock market downturn.  The market trend reversed, though, when President Trump commented on Thursday that his administration is in “very productive talks” with China.  Also, on Friday, German newspapers wrote that the government would issue debt and boost spending; the country’s use of fiscal policy (i.e., deficit spending) marks a significant change.  For the week, the Dow fell 1.53%, the Russell 2000® Index declined 1.28%; the S&P 500® Index fell 1.03% and the Nasdaq lost 0.79%.

President Trump announced last week that some tariffs scheduled to become effective on September 1st would be delayed until mid-December; and September’s scheduled trade discussions are still likely.  Economic data from the U.S. and China signal that both countries are suffering from the trade war. Many investors, unsettled by the inconclusive and volatile headlines, have chosen to move to Treasuries and cash.

Even so, well-managed companies are well-positioned to ride out the uncertainties, and the impact on their current stock prices.  Some are taking steps to mitigate the tariffs yet such actions may become increasingly difficult the longer the conflicts persist.  Globally, the decline in interest rates present challenges for investors to find attractive investment opportunities; many will focus on stocks with high dividend rates.  All eyes, though, look towards the eventual resolution of trade disputes to enable a rebound in economic growth.

We believe the stock market will likely be range-bound until a) the Fed eases more aggressively – perhaps 2 more times in 2019 and/or b) there is a definitive end to the U.S. trade tensions with China.  “There Is No Alternative” rules for the time being with regard to sector allocation – defensive stocks and high growth companies will likely continue to outperform in a period of economic uncertainty & negative rates.

Tariffs could be holding up inflation in the U.S. for now. But we believe the medium-term impact of the trade war is still deflationary as global growth slows.  German GDP & China industrial production weakening reinforce this point.

There remain real risks going forward: 1) Brexit deadline (Oct 31). 2) Italy bond yields remaining elevated. 3) Japan VAT tax increase (Oct 1). 4) What does Fed language look like after several cuts? 5) Can WTI oil prices hold $50? 6) Will the U.S. impose tariffs on E.U. autos? 7) Continued U.S./China trade war. 8) Hong Kong protests. 9) Trade tensions between Japan & S. Korea. 10) Market seasonality not supportive until Oct. We are keeping an eye on all of these potential market movers and will update you if our thoughts change.  For now,  we look forward to Q3 earnings season starting in October to give better guidance from the public markets. 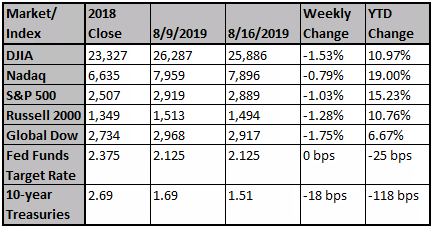 Walmart Keeps On Pushing Back At Amazon -- And Wins

Walmart is winning more on-line sales by "turning the tables," on Amazon

US stocks jump to start the week on trade optimism

Retailers will continue to report quarterly earnings this week with a focus on the home improvement retailers such as Home Depot and Lowe's.

Growth forecasts are rising and the economy looks nowhere...

By many measures, the economy is outshining the depressed picture the bond market has been painting, and a big reason is the resilient U.S. consumer.