A Goldilocks Economy - Not too Hot and Not too Cold

The persistently low rate of inflation is feeding a debate on the Federal Reserve’s monetary policy.  The latest inflation reading (specifically, the PCE Core rate) fell to an annual rate of only 1.6% despite overall strength in the economy.  White House officials and some economists argue that the Fed should support continued economic expansion by lowering interest rates; indeed, in the lead up to the Fed’s meeting on Wednesday, many investors anticipated a rate cut.  However, in announcing no change to interest rates, Chairman Powell stated that the factors contributing to low inflation were “transitory” and there was no need to consider raising or lowering interest rates.  The market’s selloff on Wednesday reflected its disappointment and yet, the markets recovered by Friday.  For the week, the Russell 2000® Index led the indices (1.40%) followed by the Nasdaq (0.22%), S&P 500® Index (0.20%); the Dow Jones Industrial Average trailed with a slight (-0.14%) decline.

Friday’s release of the April jobs report provided a positive surprise; the economy gained 263,000 new jobs versus expectations for 181,000-190,000.  Unemployment fell 0.2% to 3.6%, the lowest rate since December 1969.  Many companies have been aggressive in developing training programs to fill specialized jobs.  Other economic data were mixed; notably, productivity rose 2.4% year-over-year, the highest increase since 2010.  Productivity improvements are key objectives for many companies; gains here are especially important given the low unemployment rates.  Increased productivity also enables companies to improve sales revenues without offsetting employment expenses.  The inflation debate will likely continue; over time, officials may need to modify historical assumptions about inflation.

Corporate earnings continue to exceed analyst expectations; overall, with results from 76% of companies in the S&P 500® Index reporting, earnings have declined by -0.8% compared to estimates of -4.8%.  Individual company results include weather-related factors which caused a railroad company to slightly miss earnings expectations while reporting broad-based demand across all sectors.  A container leasing company experienced seasonal weakness yet still reported utilization in the mid-90% range.  The company commented that customers expect that shipping demand will grow during 2019.  Oil service companies also report greater demand and an optimistic outlook.  This snapshot is consistent with other corporate commentaries which support an improving view of global economies.

As the end of earnings season nears, the markets will likely focus on the progress of U.S. and China trade negotiations and Brexit.  The market bias remains positive despite occasional pullbacks. 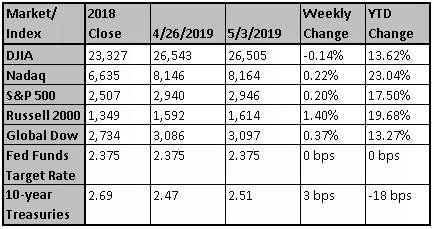 Today the US president tweeted his plans to introduce greater tariffs on Chinese goods, despite recently suggesting that trade negotiations were going well.

Fears of recession have faded

INVESTORS STARTED the year brooding about the risk of an American recession. Torsten Slok of Deutsche Bank, Germany's biggest lender, says clients around the globe were worried. Financial...

The labor Department also said unemployment dropped to 3.6 percent, beating analysts' expectations of 3.8 percent and the lowest rate since 1969.