Coronavirus is the focus for now

Once again, the major indices moved higher last week despite the on-going focus on the coronavirus. The Nasdaq (2.21%) led the major indices followed by the Russell 2000® Index (1.87%), the S&P 500® Index (1.58%) and the Dow Jones Industrial Average (1.02%). On Thursday, China announced revised diagnostic criteria for the virus; the change increased the number of cases to 66,492 with 1,523 deaths. The news unsettled the markets on Thursday, with modest gains in the Nasdaq and S&P 500® on Friday.

The difficulties in projecting the economic impact from the coronavirus will be compounded by the extended Lunar New Year holiday. The Chinese government has been providing stimulus to support the economy during this critical time. Most expect the coronavirus to soon peak and recede by the end of the first quarter. For U.S. companies, the economic impact will vary based on their reliance on sales in China and dependence on supplies from now-closed Chinese factories. S&P 500® companies, on average, generate approximately 62% of sales in the U.S. and only 5.8% from China. Many U.S. companies took steps during the tariff-related turmoil to geographically redistribute their supply channels to lessen dependence on China. Triton, the world’s largest container leasing company, reported earnings today; company commentary anticipates improved shipping volumes after the seasonally weak first quarter of 2020. Historically, following a disruption from a health epidemic, the combination of pent-up demand and government interventions often boost sales and market appreciation; such a reaction would not be unusual.

Corporate news highlights of the week include the federal judge’s long-awaited decision to approve the T-Mobile and Sprint merger. Another federal judge halted the U.S. Defense Department $10 billion JEDI cloud contract with Microsoft in response to a lawsuit filed by Amazon. The stakes for both cloud computing giants are high.

Almost 80% of S&P 500® companies have reported earnings; more than 20% have said that the coronavirus will impact revenues or profits; for the year, analysts expect earnings growth of 8.1% in 2020. The U.S. economy has continued to perform well despite trade and tariff disputes and disruptions related to the major health epidemic in China. Market sentiment remains positive although election year developments and geopolitical events will likely continue to produce periods of volatility. 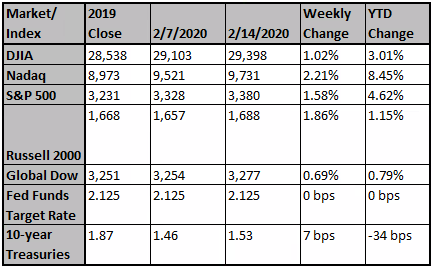 The Trump administration is considering trade restrictions on China that would limit the use of American chip-making equipment, as it seeks to cut off access to key semiconductor technolo...

"I believe good regulation may hurt Facebook's business in the near term but it will be better for everyone, including us, over the long term," Facebook CEO writes in a new op-ed.

ECB negative rates not harmful, but inflation rise to sta...