Markets are off sharply this morning as the virus headlines appear to have worsened over the weekend, yet we’re still struck with how complacent the options market has been. The daily put/call ratios remain very low, inconsistent with the type of fear often associated with an exogenous event like Coronavirus. This likely has to change, and lower prices are a catalyst. Ultimately we suspect this is a correction in an ongoing bull market, but better S&P support is still a ways off in the 3050-3075 range.

While bond yields are screaming that the Fed is still too tight, the good news is credit conditions have remained in check. Staples and Utilities have rallied, but frankly we’re surprised they haven’t been more dominant leaders given the macro backdrop (their relative peaks are still last summer). Gold remains strong, with another cluster of +2 standard deviation daily moves last week, reminiscent of its acceleration phase earlier last year.

Last week, overnight reports of 800 new cases of Coronavirus in China and 200 in South Korea triggered a Friday selloff to end three consecutive weekly gains. For the week, all of the major indices sold off led by the Nasdaq (-1.59%), the Dow Jones Industrial Average (-1.38%), the S&P 500® (-1.25%) and the Russell 2000® Index (-0.53%). China confirmed 75,000 cases and over 2,000 deaths; Korea reported its first death. Cases in other countries, such as Japan and Singapore, raised new questions about the spread of the virus to other populations.

Apple announced it would miss first quarter sales projections for the iPhone; its manufacturing factories and retail stores in China were impacted by the virus. Other companies, such as Tapestry, have expressed concerns about disrupted supply chains and store closures.

The coronavirus will continue to determine market momentum in the near term. Market analysts now suggest that valuations for growth or momentum stocks may be reaching unsustainable levels, with inevitable comparisons to the last tech bubble in the 1990s. After the tech bubble burst in 2000, value stocks regained favor and outperformed growth for several years. Investment strategies, which may generate impressive returns for a period, will nevertheless eventually fall out-of-favor. Analysts are recognizing the developing trend; still, the timing of market transitions is unknowable. In the meantime, investors, central banks, economists and government officials will closely monitor coronavirus headlines. 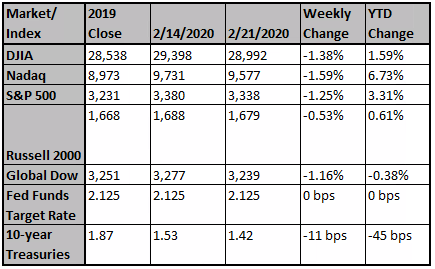 Stocks Slide as Virus Cases Accelerate Outside of Asia

Global stocks fell as investors grappled with the potential economic fallout from mounting coronavirus infections in South Korea and elsewhere, with Dow futures falling 2.5% and equities ...

President Donald Trump's phase one deal could move the world closer to free trade and ultimately save the World Trade Organization.