Coronavirus upstaged the markets’ focus on earnings and economic data

The potential global impact of the coronavirus upstaged the markets’ focus on earnings and economic data. The deadly virus has spread far beyond its origination in Wuhan China; as of Friday, over 900 cases (including 26 deaths) have been confirmed in 11 countries. On Friday, the unknown reach of the virus triggered a market selloff which was the largest decline since October 8, 2019. For the week, the Russell 2000® Index (‑2.20%) posted the biggest decline followed by the Dow Jones Industrial Average (-1.22%), S&P 500® Index (‑1.03%) and the Nasdaq (-0.79%). The selloff continues today, but if history is any clue, we would anticipate there will ultimately be a “go buy ‘em” moment.

Health officials in China have imposed travel restrictions effecting 36 million residents in ten cities. Precautions in preparation for Saturday’s Lunar New Year holiday include the indefinite closure of Shanghai Disneyland. The World Health Organization, citing insufficient data, declined to designate the virus a global health emergency; nevertheless, health officials in the U.S. are speeding testing to contain the spread. Some economists estimate that the virus may lower China’s GDP by one percent. Meanwhile, the International Monetary Fund raised its estimate of global GDP growth from 2.9% in 2019 to 3.3% in 2020.

The reach of the coronavirus extended to gold, oil and U.S. Treasuries; near-term, the virus will continue to cloud the markets until health officials are able to contain its spread. The markets will then refocus on economic data and corporate earnings. 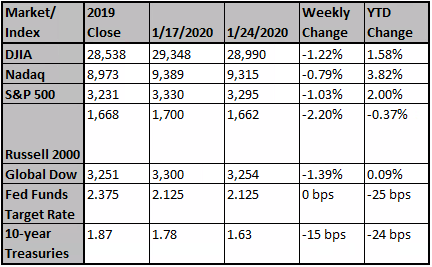 The road ahead for the U.S. economy looks pretty clear, b...

Sometimes it helps to look in the rear-view mirror to see what lies ahead for U.S. economy. And what it shows is an open road with just a few

GM to invest $2.2B in Detroit to build electric vehicles

General Motors is spending $2.2 billion to refurbish an underused Detroit factory so it can build electric and self-driving vehicles, eventually employing 2,200 people