This week, uncertainties related to the global economic impact of the coronavirus overwhelmed the markets; the virus, first discovered in Wuhan China, has spread to at least 18 countries with almost 10,000 confirmed cases including 213 deaths. On Thursday, the World Health Organization declared an international health emergency; on Friday, the U.S. declared the virus a public health emergency. Friday’s 603 point selloff in the Dow Jones Industrial Average marked the largest one-day decline in the Dow since last August’s tariff-related selloff. The CBOE Volatility Index jumped 21%. The late month selling turned a promising month into a disappointment as the “risk off” sentiment led weekly declines for the Russell 2000® (-2.90%) followed by the Dow Jones Industrial Average (-2.53%), the S&P 500® (‑2.12%) and the Nasdaq (-1.76%).

Many countries imposed travel restrictions and quarantines for individuals returning from China. Airlines including Delta and American announced flight cancellations to China until later in the spring. Several U.S. drug companies are actively working with the National Institutes of Health on vaccines and treatments; the pharmaceutical companies hope to begin human trials by April. Concerns related to weakened demand touched most sectors, including, most significantly, the Energy and Industrial sectors. OPEC has indicated that it will advance its March meeting to February to discuss additional production cuts to prevent a further erosion in oil prices.

Revenue and earnings results for Apple, Microsoft, Amazon and Tesla exceeded expectations; the results highlight the strength of consumer spending even as business spending remains weak. Corporate commentaries suggest that business spending will increase later in the year; the build-up from today’s low inventory levels should provide an economic catalyst. The initial estimate of fourth quarter GDP, 2.1%, matched the third quarter results and exceeded estimates of 1.9%. For 2019, the 2.3% GDP rate was the slowest since 2016.

The uncertainty over the coronavirus will likely weigh on the equity markets. Trading volumes remain high for companies with specific news; otherwise, trading activity is unusually low as many investors await more information. Typically, the markets react strongly to unforeseen events before recovering over time. 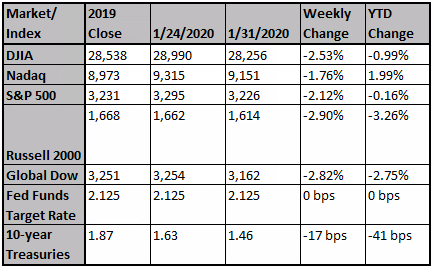 Many people are trying to organize client meetings and group discussions via videochat apps, or discussing plans on productivity software platforms like WeChat Work or Bytedance's Slack-l...

General Motors playing to its strengths with the GMC Humm...

General Motors is playing to its strengths from a profitability and product standpoint by resurrecting Hummer as an all-electric vehicle under its GMC truck and SUV brand, according to of...