Don’t fear an overbought market this time of year

A number of tactical indicators remain overbought, but the historical data would say that’s actually a good thing. Overbought conditions in uptrends are often consistent with better than average future returns and positive hit rates, and their presence is a common feature in durable market advances. Seasonality can reinforce a trend, and the calendar is clearly a tailwind for performance the final 6 weeks of the year.

Following several consecutive weeks of gains, the equity markets lost momentum last week on the revelation that trade talks between the U.S. and China were not as far along as earlier commentary suggested. All of the major indices were negative for the week: the best performer, the Nasdaq, falling 0.25% followed by the S&P 500® Index (-0.33%), the Dow Jones Industrial Average (-0.46%) and the Russell 2000® Index (-0.47%).

The markets rose on Friday following comments by President’s Xi and Trump. President Xi Jinping said that, while China holds a “positive attitude,” towards trade talks, it is not afraid to “fight back.” President Trump later commented that both sides were “very close” with a “very good chance to make the deal.” Some observers suggest that a Phase One agreement may be the most optimistic outcome as concerns by both countries (China over the suspension of existing tariffs; the U.S. over commitments for agriculture purchases) remain. Investors, in reading the “tea Leaves,” may grow increasingly concerned as negotiations continue.

Last week’s U.S. economic reports were encouraging: the preliminary November purchasing managers indices (PMI) for both manufacturing and services rose to a seven-month and four-month high, respectively. Strong corporate earnings reports from Target, Nordstrom and Hibbett demonstrate that consumers continue to support economic growth. Eurozone economic data were mixed; slight improvements in the manufacturing index (in both German and France) provided some optimism although the industry remains in contraction and overall growth remains sluggish.

This week, trading activity, in the absence of new developments, may slow as the waiting game continues. The movement of the CBOE Volatility Index (the “VIX”) may provide a cautionary note. Typically, the stock market and the VIX move inversely; this month, though, the trend of the VIX is in tandem with the market. Analysts suggest that investors may be overly optimistic (ignoring less-than-favorable trade headlines) and fearful of missing out on the market rally. A delay in the much-anticipated trade deal may trigger a return to more normal conditions. 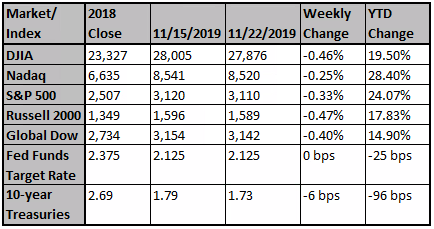 You better believe the Fed is doing quantitative easing...

The Federal Reserve's balance sheet is on track to rise to a record high by mid-2020, creating a fertile ground for risk assets, says Ivan Martchev.

The broad stock-market index is outpacing for a third consecutive year its equal-weighted counterpart that avoids playing favorites based on size.

China just signaled that it could reform its IP laws. Tha...

China's has unveiled new guidelines about the protection of intellectual property, a move that could mark a big step toward appeasing the United States, and may even help pave the way for...