Markets were relatively flat last week as investors gear up for third quarter earnings season (more on this below). Economic data were broadly positive and continue to point to healthy economic conditions. September retail sales grew at their fastest pace since March 2015, due in part to hurricane-related replacement activity for autos and automotive supplies. Of note in the report, building materials sales were strong, gaining 10.7% year-over-year, while online retailers (+9.2%) continued to take share from traditional “brick-and-mortar” stores. Inflation increased slightly as both the consumer price index (+2.2%) and producer price index (+2.6%) were higher compared to August; the data should enable the Federal Reserve to raise interest rates in December, as expected. Meanwhile, the U.S. dollar weakened for the first time in over a month; year-to-date, the dollar has declined roughly 9% against a basket of major trading currencies. Notably, the dollar is down nearly 11% against the euro as the European economy has strengthened and the European Central Bank prepares to curtail its bond-buying program. In this instance, the declining dollar is a function of improved economic growth overseas rather than an indication of a faltering domestic economy.

Earnings season kicked off last week with banks in focus. JPMorgan Chase, Bank of America, and Citigroup all exceeded analysts’ earnings expectations, while Wells Fargo fell short. For JPMorgan, core loans grew 7% year-over-year, while net interest margin (a measure of profitability) improved. At Bank of America, reduced provisions for loan losses and lower expenses more than offset soft fee income. Citigroup reported strong equity and fixed income trading revenues which were partially offset by higher credit card costs. And, results at Wells Fargo were impacted by litigation expenses; excluding these charges, though, performance would have exceeded analysts’ estimates. Despite the generally upbeat reports, shares of all four banks were down for the week, likely due to profit-taking; with the exception of Wells Fargo, the banks had produced solid returns thus far in 2017. Airlines gained on a better-than-expected earnings from Delta Air Lines, along with upbeat investor updates from United Continental and American Airlines, both of which report earnings later this month. Importantly, all three indicated that pricing competition has stabilized, which should aid industry profitability and assuage investor concerns heading into the busy holiday travel season.

This week, 52 companies in the S&P 500® Index report results. These include industry bellwethers such as: Johnson & Johnson, Goldman Sachs, International Business Machines, Verizon Communications, General Electric, Procter & Gamble, Schlumberger, and Honeywell International. Also, Netflix will provide its quarterly update; the stock, which has gained more than 60% year-to-date, is one of the popular FAANG companies that have led the market’s advance, and captivated investor interest, for much of the year. The broad swath of earnings reports will provide a comprehensive view of the economy and could contribute to increased trading volumes and market volatility over the near-term. 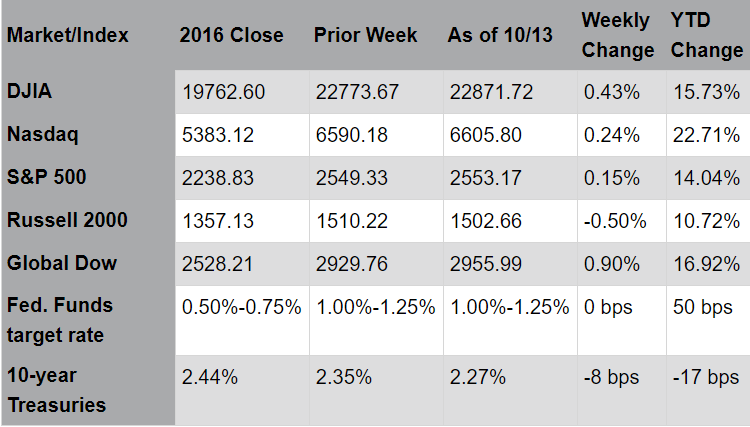 Trading volume should pick up following the Columbus Day week. Hurricane Harvey affected industrial production in August. September's report should reflect the impact, if any, of Hurricane Irma on industrial production in September. The latest report on existing home sales is available at the end of the week, followed by September's new home sales figures, which come out next week.