Stocks were higher last week as strong corporate earnings supported the markets’ continued momentum. The Dow Jones Industrial Average, aided in large part by a 10% rise in shares of International Business Machines (IBM), surpassed 23,000 for the first time; the technology giant’s second quarter results exceeded analysts’ estimates. Signs of progress on tax reform also provided some optimism; the Senate’s adoption of a budget resolution could enable tax legislation to withstand a filibuster in the Senate. Still, significant challenges, and unresolved differences in the House and Senate versions remain. U.S. economic data, which captured the early impact of September hurricane activity, were mixed. Conditions overseas, though, remain encouraging: China reported economic expansion of 6.8% in the third quarter, and month-over-month increases in industrial production (+6.6%) and retail sales (+10.3%). On Wednesday, the country opened its National Congress, a once-every-five year gathering of Communist Party officials; President Xi’s speech outlined his plans to position the country to “stand proudly among the nations of the world” and “become a leading global power” by 2050. His priorities include structural reforms, innovation in aerospace, transportation and climate technology, increasing the role of markets, and encouraging foreign investments. China’s continued development should provide a tailwind of economic growth over the next several decades. 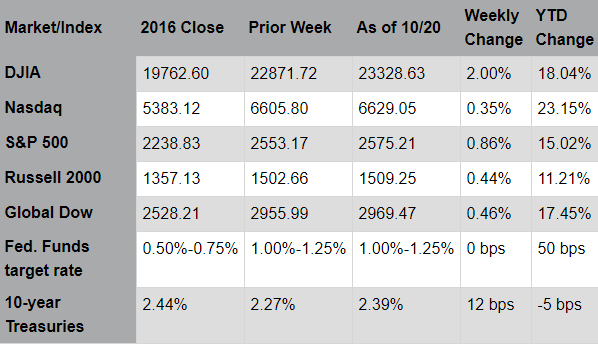 Earnings season continues: to date, 87 companies in the S&P 500® Index have reported results; of these, 70% have exceeded analysts’ sales estimates while 75% have exceeded analysts’ earnings per share (EPS) estimates. The quarter’s blended sales growth rate (which includes actual and estimated results) stands at 4.9%, while the EPS forecast, which reflects the impact of hurricanes during the period, is just 1.7%. The Energy services industry is on track for a 52.6% projected growth in sales and 273.5% growth in EPS; these figures reflect both depressed activity levels last year as well as a recovery in drilling and production work this year. On earnings conference calls, management teams across a variety of industries discussed the favorable impact tax reform could have on their businesses and the economy as a whole. Still, companies seem to acknowledge the long road ahead while nevertheless revealing a growing sense of optimism for tax reform. This week, earnings activity peaks with 180 companies in the S&P 500® Index providing updates. The results should establish the tone for the reporting period and enable investors to begin shifting attention from earnings to broader economic developments.

The first report on the third-quarter gross domestic product is out at the end of the week. The second quarter saw the economy grow at a rate of 3.1%, although prices expanded at a more moderate 1.0%. Other important economic reports out this week include the September figures on orders for durable goods and international trade in goods.