Stocks were up-and-down last week as a mixed batch of earnings reports stalled the market’s momentum. Technology led all sectors with favorable updates from Amazon and Microsoft, and strong pre-orders for Apple’s iPhone X. After their recent, and brief, pause, the FAANG group of large cap technology stocks again led the broader market to new highs. Healthcare lagged all sectors on underwhelming earnings results, particularly among biotech companies, and a shift in industry dynamics. Amazon has received regulatory approval for wholesale pharmacy licenses in twelve states; the recent revelation has raised investor concerns for traditional drug distributors and retailers. On Thursday, the media announced that CVS Health is in negotiations to purchase Aetna; the deal would represent a healthcare triple play in a first-ever combination of a pharmacy retailer and pharmacy benefits manager and an insurer. Meanwhile, Treasury yields closed at their highest levels since March; strong economic data and the Federal Reserve’s gradual tightening of monetary policy should place continued upward pressure on rates. Indeed, the 3.0% estimate for 3Q GDP growth exceeded expectations of a +2.5% rate of expansion; highlights included a slowdown in personal consumption and increased spending on durable goods such as cars, appliances, and furniture. The report suggests a mixed impact from Hurricanes Harvey and Irma; continued strength in business investment provides some momentum heading into the final two months of the year. 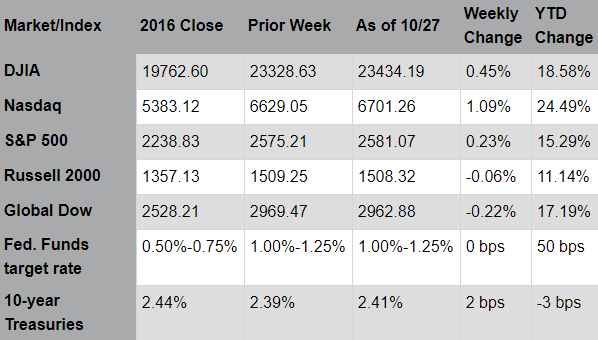 Other economic headlines last week included strengthening oil prices, passage by the House of the Senate’s budget resolution, and indications that President Trump will soon announce his selection of the next Federal Reserve Chair. Brent crude oil, the international benchmark, closed above $60 per barrel for the first time since July 2015 on improving demand. Also, last week, Saudi Arabia and Russia declared their support for an additional nine-month extension to the current production agreement which runs through March 2018. Also, energy company executives have indicated in conference calls that shale oil producers are shifting focus from maximizing production to sustainable profitability; this change in priority should support the recent rally in crude prices. On the tax front, the House approval of the Senate’s budget enables a fast-track “reconciliation” procedure, a filibuster-proof approach, to tax reform legislation. Much negotiation remains as the House has still not revealed details of the proposed legislation. As to the next Fed Chair, President Trump announced that he will nominate the next Fed Chair before he departs next week on his trip to Asia.

This week, earnings season continues with 131 companies in the S&P 500® Index, including Aetna, MasterCard, Pfizer, Estee Lauder, Facebook, and Apple reporting results. Of the 274 companies in the Index that have thus far reported, 66% have exceeded analysts’ sales estimates and 76% have exceeded analysts’ earnings per share (EPS) estimates. The quarter’s blended sales growth rate (which includes actual and estimated results) improved from 4.9% last week to 5.6%; and, the blended EPS forecast improved from 1.7% to 4.5%. The upgraded projections reflect a faster-than-expected recovery from the hurricanes as well as an improvement in overall economic conditions. Specifically, impressive results in the transportation sector confirm an acceleration in industrial activities which could, in turn, serve as a catalyst for a new cycle of growth and investment.

The Federal Open Market Committee is expected to raise interest rates this week as inflation and economic growth seem to be moving upward. The jobs report for October is out at week's end. September saw the number of new jobs decrease for the first time in several months. That trend is expected to be short-lived.