Those investors who entered 2021 with a bearish outlook never really got their chance to take advantage of any sell-offs. The max drawdown for the index was just -5.2% which ranks as the fourth smallest pullback since 1987.

70 New Highs Were Made Last Year

My colleague, Todd Sohn, tells me that there were 70 new highs made in 2021. This is the second-best year for new highs, only behind 1995, where there were 77 new highs made. Historically, when the number of new highs has been at elevated levels, the market has gone through a stretch in the following years of more new highs.

The top 10 issues in the S&P 500 comprise nearly 30% of the overall index, making it more top-heavy than ever, with the historical average being closer to 21% based on data from 1980. Furthermore, the 6.9% weight that Apple carries makes it the largest single-issue ever in the index. Investors have to go back to the mid-1980s to find an issue besides Apple that has made up more than 6%.
Source: Strategas

Each year we like to bring you the top 10 predictions from one of our favorite portfolio manager and Friend Bob Doll. Bob was the head of Merrill Lynch investments when we were at Merrill Lynch and he is now the Chief Investment Officer at Crossmark asset management. His predictions have been very insightful and his track record has been better than most.

Risk taking was heavily incentivized by extreme monetary and fiscal reflation. For example, meme stocks captured headlines several times during the year as short squeezes created significant upside in some stocks with little overall market impact. These types of activities were amplified because consumers enjoyed record (more than $2 trillion) excess savings created by government transfer payments and reduced consumption in some COVID-impacted industries.

During the year, one of the most noteworthy developments was a substantial rise in inflation from the less than 2% annual rate that existed for about a decade to nearly 7%, the highest in about 40 years. Belatedly, the Fed admitted that inflation was not transitory and has accelerated its recently announced tapering program, preparing the way for rate hikes in 2022. Policymakers acted as if the economic cycle was fragile and ready to fall into recession even though the threat of deflation had long since ended.

Given these developments, 2022 will likely be more challenging for investors, as the Fed and other central banks progressively unwind accommodative policy in response to the ongoing economic recovery/expansion and elevated inflation readings. While economic and earnings growth are likely to be good, a “too-high” inflation backdrop and rising real interest rates suggest less favorable and more volatile conditions for investors than have prevailed since the pandemic lows.

With this backdrop I proceed as usual with fear and trepidation (and hopefully some good educated guesses) to unveil my prognostications for 2022 in the form of Bob’s 10 Predictions. 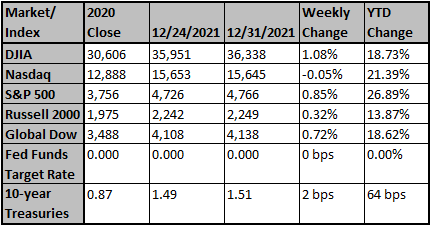 This week's economic indicators will feature measures of U.S. and European manufacturing, the U.S. trade deficit and Friday's much-watched employment report for America.

Jobs report and Fed meeting minutes: the week in business.

Jurors in the Elizabeth Holmes trial will continue to deliberate, and a report will show how many people quit their jobs in November.