We remain focused on the economy’s progression through the traditional start-of-cycle sequence, that is: a catalyst – in this case, the broad distribution of the vaccine and the re-opening of the economy – leads, in succession, to an increase in activity, demand, output, revenue, investment, and profits. By our lights, the durability of the expansion is largely defined by the self-reinforcing increase in corporate investment fueled by the post-contraction repair of the revenue stack. The successful transition between the two relies on the emergence of an organic driver (or drivers) of growth and the productive deployment of capital. The combination should strengthen and prolong the nascent profit cycle.

With aggregate free cash flow knocking at all-time highs, it is worth considering that operating companies really only have 7 outlets for corporate cash: save; dividends; buybacks; debt reduction; acquisitions; hire; or, capex. We would anticipate an increase in all but saving as the cycle matures, i.e. the slope of growth in free cash flow should soften. It would seem the economy would be better served in the long run if capex, then labor, pulled a greater share of capital. In the absence of an emergence in organic growth drivers, the increase in revenue often directly fuels the growth in profits, which seems appealing… and often manifests in sharply higher equity prices, but can also result in a shorter cycle and subsequently sharp decline in the markets.

With first-quarter earnings, nearly 90% reported, the earnings growth rate is expected to be more than 50%, with the discretionary sector showing the greatest growth rate. The lowest growth sector is the industrials, which was weighted down in part from losses seen by the airlines. On the revenue side, growth is expected to come in near 13%. 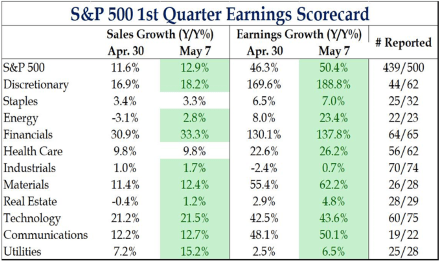 While the 2021 Consensus EPS figure has increased by more than $13 on a per-share basis, the first quarter beat accounts for more than 60% of the increase. Comparing the first 1Q’21 to 1Q’19 EPS growth would be north of 20%. While a majority of the economy remained closed for a portion of the second quarter, we suspect some activity was pulled forward, and the back half of the year will be more challenging. However, if the pace of surprises continues, $200 for 2021 is not out of reach.

S&P 500 estimated operating margin for the next twelve months continues to climb and now sits at 16.2%. This reading is just below the peak of 16.4% that was seen in 2018. While the pace of the rise has been remarkable, we still believe it should slow. Supply chain constraints leading to higher input costs and the return of variable costs for companies as we lap the shutdown are two reasons we believe this is the case.
Source: Strategas 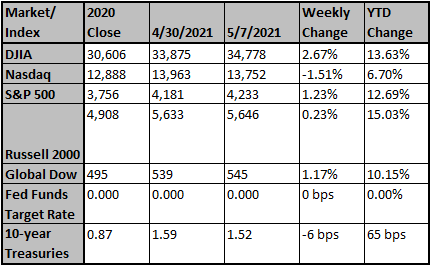 Friday's lackluster jobs report added fuel to efforts in Florida and elsewhere to reduce access to unemployment benefits that some state and industry leaders say have kept people from ret...