The equity markets treaded water for much of the week due to uncertainties related to the impact of last Friday’s strong jobs report on a potential rate cut.  On Thursday, the markets rose following Federal Reserve Chairman Powell’s Congressional testimony.  In describing the economy as “in a very good place,” he added that his main worry relates to global growth and that many Fed members “have come to the view that a somewhat more accommodative monetary policy may be appropriate.”  His comments along with Wednesday’s release of Minutes from the Fed’s June meeting indicate that the Fed would be willing to cut rates if risks and uncertainties “continue to weigh on the economic outlook.”  Many interpret these comments to suggest a likely 25 basis point reduction in the fed funds rate at the late July meeting.  Ironically, the rate cut would return rates to the level prior to the hike which triggered the December equity selloff.  The Dow Jones Industrial Average led all market indices gaining 1.52% followed by Nasdaq (+1.01%), S&P 500® Index (+0.78%) and Russell 2000® Index (-0.36%).  On Friday, the S&P 500® crossed 3000 for the first time.

Trade discussions between the U.S. and China resumed by phone this week although the parties seem to disagree on commitments that were, or were not, made during President Trump’s discussions with President Xi at the G20 summit.  Peter Navarro, Assistant to President Trump, stated that talks are going well and meetings in China are being planned while China’s Commerce Ministry indicated that substantial discussions have yet to restart.  Company and market commentaries appear to welcome the truce while anticipating that any trade agreement will take months to complete.

The price of West Texas Crude (WTI) closed above $60 for the first time since late May as the U.S. Energy Information Agency reported back-to-back weekly inventory declines.  Also, disruptions caused by storms in the Gulf of Mexico and continuing turmoil in the Middle East fueled the rebound in prices.  The price rebound provided a boost to the equity markets as oil prices are often viewed as a reflection of global growth.

For the past month, macroeconomic concerns have driven market sentiment.  Many companies remain undervalued despite year-to-date gains in most of the major indices.  Next week, second quarter earnings reports begin with Citigroup, JP Morgan and Bank of America.  Earnings expectations are low; investors will focus on company commentaries regarding current business conditions, the impact of tariffs and expectations for the remainder of the year.  During the next few weeks, corporate earnings will likely take center stage in influencing market momentum. 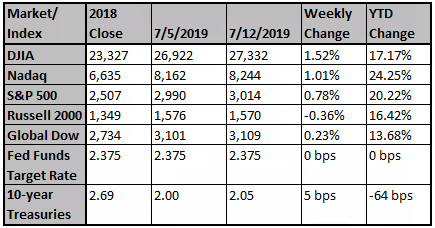 1. The number of job openings was little changed at 7.3 million on the last business day of May, the U.S. Bureau of Labor Statistics  reported today. Over the month, hires fell to 5.7 million and separations edged down to 5.5 million. Within separations, the quits and the layoffs and discharges rates.

A turbulent day on Wall Street ended in the record books Thursday as the Dow Jones industrial average climbed above 27,000 for the first time and the S&P 500 index hit another all-time hi...

The government collected $2.6 trillion in receipts, a 3% increase, but higher spending on the military and interest on the debt drove federal outlays up 7% WASHINGTON-Government tax recei...

The Trump Administration is threatening the extend its trade war to France as the country prepares to hit big tech companiesmany of them Americanwith a new tax. A 3% levy on tech giants w...