The Dog Days of Summer

If the temperature along the East coast this weekend wasn’t a reminder, with the dog days of summer also comes a shift in the market’s seasonal bias.  Ultimately, seasonality is a small consideration in our thinking, but it’s helpful in determining when to press or when to play more patiently.  With internal momentum starting to contract, we suspect the latter approach may prove prudent over coming weeks.  Whether it’s a market consolidation marked more in time or price is unknown, but there are some overbought conditions that likely need to be relieved.  We’re still of the position that pullbacks are to be bought, we’re just less sure of the market’s tactical standing.

The major indices closed lower after the S&P 500® Index and the Nasdaq reached record highs.   Last week, the Russell 2000® Index fell 1.41%, followed by the S&P 500® (-1.23%), the Nasdaq (-1.18%), and the Dow Jones Industrial Average (-0.65%).   Late in the week, the markets seemed to lose momentum following earnings results and Iran’s capture on Friday of a second British tanker in the Strait of Hormuz.  Also, investors continue to react to the latest speculation on potential Federal Reserve interest rate changes at its July 30-31 meeting.  Commentaries by Fed governors late in the week strengthened the market’s expectation for a 25 basis point rate cut.  Earnings projections by several major banks which reported earnings this week anticipate one to three rate cuts during 2019.

Trade concerns became even more complicated last week.  While uncertainties remain over trade negotiations between the U.S. and China, other developments took center stage.  In France, the Senate voted to implement a new ‘digital tax’ on large tech companies (including Amazon, Apple, Facebook and Google) after the European Union was unable to finalize an EU-wide tax program.  Also, the decades-long dispute between Japan and South Korea over wartime occupation is effecting trade between the two countries as Japan limited the export to South Korea of high-tech materials used for memory chips.

Heading into earning season, analysts set a low bar with an expected 3% decline in earnings.  So far, 15% of the S&P 500® companies have reported, with 79% exceeding expectations.  The results, though, provide no clear message on market direction.  Microsoft posted surprisingly good revenues and earnings driven by a 39% increase in cloud-based revenues; still, the stock posted only a fractional (0.15%) gain in reaching an all-time high.  In contrast Netflix earnings declined over 10% on lower subscriber growth.  Financials such as American Express, Citigroup and JPMorgan Chase beat earnings estimates yet closed lower in anticipation of lower interest rates.  And, companies in the transportation sector, which often provide an indication of future economic conditions, reported mixed results with commentaries on tariff-related uncertainties for the remainder of the year.

This week, 25% of the S&P 500® will report quarterly results.  Management commentaries may continue to reflect concerns about on-going trade tensions as well as their initiatives to increase profits going forward.  Several issues, including corporate earnings and related commentaries; trade negotiations; and the Fed’s interest rate policy, may keep the markets in a trading range over the summer. 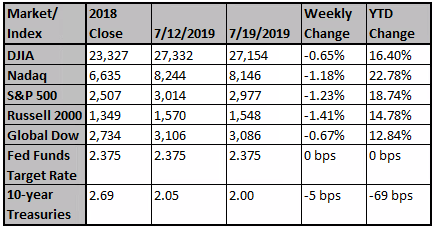 Technology shines on an otherwise sluggish day for US stocks

Technology companies were a standout in midday trading on Wall Street Monday in an otherwise sluggish day stocks.

Terms of Trade is a daily newsletter that untangles a world of embroiled in trade wars. Sign up here. Face-to-face negotiations between the top Chinese.