PIVOTAL WEEK FOR MARKETS ON TAP

Naturally, during times of market stress, every week seems pivotal. Still, the next five days will be chock-a-block with earnings, economic releases, and economic events that are likely to set the tone for the market and a fair amount of political commentary for the rest of the summer. More than 170 S&P 500 companies will report earnings this week (including 12 Dow components), while 2nd quarter GDP and the Fed’s preferred measure of inflation - the Core PCE- and the ECI will also be announced. If that wasn’t enough, the Fed will be announcing its new target range for the Fed Funds rate.

At this early stage of the reporting period, it would be fair to say that earnings are coming in better than expected. Still, it is early. While 21% of the companies in the S&P 500 have reported EPS (Earnings Per Share), only 11% of the market’s largest and most critical sector – Technology – have announced earnings. We will all learn quite a bit about the state of the economy, monetary policy, and profits in the next five days and commentary surrounding these events is likely to set the tone for the midterm elections this November. We are cautious on the market because while we feel that earnings multiples have largely discounted higher inflation, earnings estimates have not yet begun to discount what would seem to be some obvious pressures on profit margins. We would be the first to admit that this view has become consensus.

75% OF COMPANIES BEATING ON EARNINGS 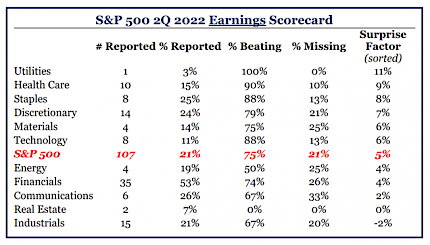 70% OF COMPANIES BEATING ON REVENUE 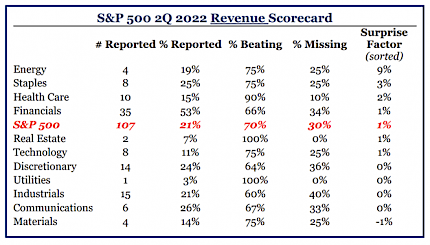 With the Q2 earnings season still in the early stages, aggregate EPS growth is expected to be 6.2%, which is just ahead of the 5.6% that was expected on July 1st. However, the headline data tells a better story than the underlying sectors as only 4 of the 11 sectors are above the levels expected at the beginning of the season. Sales growth looks marginally better thanks to elevated levels of inflation. 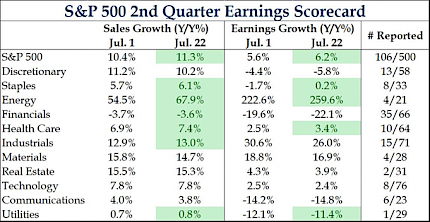 A recurring theme that we have heard during the early weeks of earnings season has been “cost inflation”. Companies are clearly beginning to feel the effects of higher input costs which will weigh on margins. On the positive side, companies are reporting they expect some easing of supply strains which should help but we believe cost inflation will be a trend for the remainder of the quarter and throughout the back half of the year. 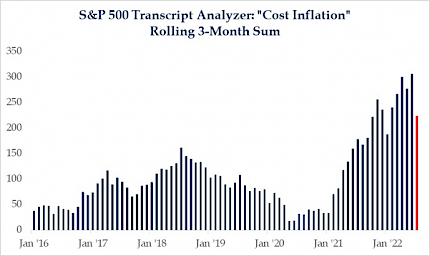 One of the items we are still waiting for is downward revisions to the 2023 EPS. As it stands now, the 2023 estimate is $248 which is down from $252 one month ago but we believe it has much further to fall. Our estimate remains $234 which may also prove to be too high if economic conditions weaken further and unemployment begins to rise. After all the Fed still appears to be in the early stages of its tightening cycle. Although we are hearing more and more about a Fed pause. 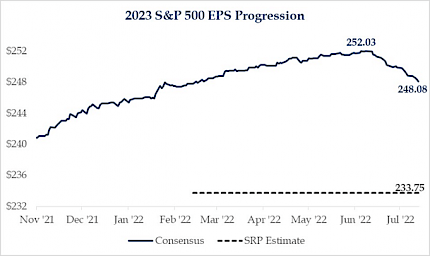 The rapid pace at which analysts are lowering price targets comes as no surprise and is actually what we’ve expected for some time now. Analysts were clearly waiting for the cover from company guidance which they now appear to be getting. The utility in this data series is more when it begins to roll over which is now what we will be watching for. 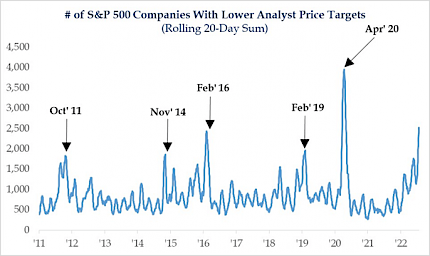 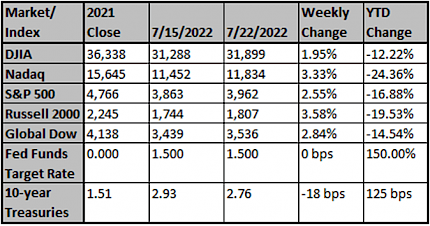 Apple, Meta, Pfizer Among Key Companies Reporting In The ...

Big tech earnings will flow in thick and fast in the upcoming week, providing more clarity on how supply chain disruptions and the macroeconomic malaise have impacted these companies. Mid...

In a busy week, investors will get an interest-rate decision from the Fed, GDP and inflation data, and a wave of corporate earnings, including from Big Tech.

Traders will be looking at quarterly results from 12 Dow members and 170 S&P 500 companies this week, including Alphabet, Microsoft, GE and Comcast.