Surprise Jobs Report muddies the waters for the Fed 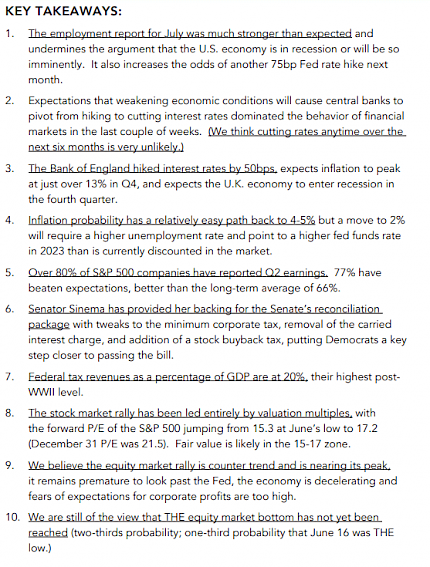 At full employment, U.S. job growth should be slowing – we’re still waiting. U.S. nonfarm payrolls surged +528,000 month over month in July, with upward revisions to prior months. Gains were broad-based across industries. The unemployment rate fell to 3.5%, though the labor force participation rate fell to 62.1%. Labor supply not showing up is increasing the concern about overheating. Wage gains furthered this concern: average hourly earnings in July accelerated to +0.5% month over month (5.2% year over year).

A “peak inflation” story had provided some reprieve for risk assets. We have no reason to push back on “peak.” The U.S. manufacturing ISM prices index, for instance, has started to turn lower. Oil prices are down. The question is where core inflation settles out. Fed Chair Powell has noted that policy going forward will be made on a meeting-by-meeting basis using incoming data. It remains tough to believe policy is overly tight if we are looking at low/negative real interest rates.

Peak inflation has been driven in part by peak (global) bottleneck. But “peak” still does not mean “fixed.” With the JOLTS (Job opening) data showing U.S. job openings in June remained close to 11 million, there’s still evidence of an over-heating domestic labor market. This matters for prices set locally (ie, services prices which are almost 60% of the CPI).

The Fed should not pursue a stop-and-go strategy – this was a mistake in the 1970s that did not work out well (ie, it led to stagflation). The FOMC knows this. A policy “pivot” could be slower rate hikes (eventually) in Sept-Dec, but the bar for rate cuts any time soon remains high in our opinion.

We still have this situation: demand in excess of supply has generated inflation, which is threatening to become entrenched. So, many policymakers have taken aggressive action (including the Bank of England last week).

In the U.S., the first step was to get from emergency policy (0% fed funds) to the FOMC’s view of long-run neutral (~2.5%). This move happened quickly. The next step will be to move from neutral policy, to restrictive/tight.

Restoring price stability is key. This has not been accomplished yet, so the FOMC is still looking for a slowdown in demand. The U.S. 2yr/10yr yield curve has become more deeply inverted. Some softening in the U.S. labor market (unfortunately) looks necessary – initial jobless claims were 260,000 last week.

Bottom line: the U.S. labor market is still overheating. The U.S. economy is trying to look like 2019, but without a 2019-balanced labor market. Inflation pressure remains, and central banks are focused on this risk.

In our opinion, the FOMC will have to slow down from aggressive +75bp rate hikes, though the door remains open to one more big hike in September based on last week’s jobs report. The U.S. economy is weakening (eg, weak real GDP in the first half of 2022, money supply shrinking). The labor market is showing some cracks (eg, weekly jobless claims trending up). But we don’t want to mistake a slowdown to +50bp or +25bp hikes for a full Fed pivot (ie, rate cuts). Anchoring inflation expectations remains a process, which is not yet complete.

Peak inflation remains different from mission accomplished. There’s evidence demand is slowing. Until supply catches up, restraint is what is necessary to bring inflation under control – tight policy must persist. 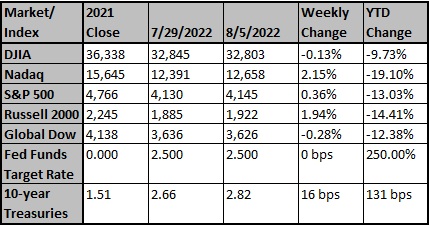 Hiring Gets Easier for Some Employers Despite Hot Job Market

Verizon, Uber, Marriott and others hardest hit by the pandemic say they are seeing emerging signs that recruiting workers is becoming less of a challenge, even as the overall job market r...

Danger ahead: The U.S. economy has yet to face its bigges...

You'd be hard-pressed now to find a recession in the rearview mirror. What's down the road, though, is another story.

Rates have fallen swiftly from their 13-year high of 5.81% in June.