Stocks lagged last week as competing visions of tax reform weighed on investor sentiment; small cap stocks and sectors which respond to economic growth, such as Materials and Industrials, underperformed. On Thursday, the Senate revealed its proposal for tax legislation which differs from the House version that was released last week. Republican lawmakers now face the challenge of crafting a bill that can pass both chambers with a simple majority vote. The market’s negative reaction this week may reflect concerns over the Senate’s version which would delay, until 2019, the implementation of the corporate tax reduction; the timing would likely impact corporate growth plans. And yet, over the past several weeks, merger and acquisition (M&A) activity has picked up, most notably with CVS Health’s reported bid to purchase Aetna and Broadcom’s offer to acquire Qualcomm. Indeed, since last November’s elections, over $1.2 trillion in deals across nearly 13,000 transactions have been completed, the most ever for a first-term president. Companies are apparently responding to strong economic growth at home and abroad as well as a business friendly administration vis-à-vis deregulation and potential tax reform. On the regulatory front, the Trump administration has, according to the U.S. Chamber of Commerce, issued 29 executive actions to reduce regulatory requirements and an additional 100 directives to soften existing rules effecting businesses and industries. These actions have increased business confidence and encouraged growth investments; corporate tax reform would further enhance these benefits. 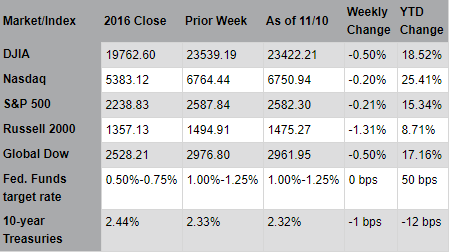 Department stores were in focus last week, with earnings results from Macy’s, Nordstrom, and J.C. Penney. Shares of Macy’s gained +8.8% despite a -3.6% deterioration in same-store-sales; better-than-expected gross margins enabled the company to outperform analysts’ earnings per share (EPS) estimates. Nordstrom (+4.0%) also delivered EPS that outpaced analysts’ forecasts, but a steeper contraction in same-store-sales weighed on results; the company’s off-price concept, Nordstrom Rack, disappointed due to markdowns on excess inventories. Shares of J.C. Penney (+33.8%) spiked after reporting a 1.7% increase in same-store-sales; the gain, the first in five quarters, was well ahead of management’s guidance of +0.6% to +0.8%. On their earnings conference calls, the companies noted improving sales trends toward the end of the quarter which have continued into November. Retail stocks suffered sharp losses in the third quarter as the “Amazon threat” affected industries from fashion apparel to sporting goods, automotive parts, and even pharmacies. Though the sector continues to face meaningful challenges, the group’s relative outperformance this week compared to the broader market is an encouraging sign. The positive returns might indicate a recovery is underway as companies respond to a rapidly changing industry dynamics.

The markets have rallied impressively since President Trump’s election one year ago; the 21.2% rise in the S&P 500® Index is the 3rd largest for a first-term president since 1952. An upswing in global economic growth and low interest rates have driven market performance; but, the gains also reflect investor and business optimism related to deregulation and potential tax reform. Macroeconomic data as well as various industry metrics, such as an increase in commercial truck orders and rising rates on freight movements, underscore improving business confidence. More importantly, companies are embarking on longer-term expansion strategies, which could help extend the current economic cycle well into 2018.

Inflation has been moving upward, but not enough to influence the Fed to raise interest rates. This week, inflationary trackers including the Consumer Price Index and the Producer Price Index provide price information for October.