From depressed levels from the Corona virus, we are continuing to see some very large economic growth rates. The manufacturing PMI returned to expansion territory in the U.S., rising to 52.6 in June with a surge m/m in the new orders component (a leading indicator). The Conf Board survey of consumer confidence rose to 98.1 in June, with increases m/m in both the present situation & expectations components. The present situation survey reflects recent improvements in the U.S. labor market. The improvement in expectations fits with rising values of risk assets.

The U.S. BLS jobs report was generally strong m/m in June, with nonfarm payrolls up +4.8 million. But the effects of lingering unemployment (11.1%) are still being felt. The BLS report reflects the pay period that contains the 12th of the month, so the most recent state (re-)closures will filter into next month’s numbers. Initial jobless claims were still elevated at 1.427 million in the June 27th week, and continuing claims were 19.29 million in the June 20th week.

We continue to believe there are 2 different business-cycle dynamics now. Recession #1 (Feb-May) looks over. Second, there remains the lingering effect of high unemployment (in many counties) which is unstable economically & politically. So, the expected plateau in economic growth still needs to be digested, as permanent U.S. layoffs continue to climb. Online restaurant bookings in some states are rolling back over y/y, as an example. Policymakers remain alert to this second problem (eg, the Fed minutes noting the calls for more forward guidance). But the best fix is likely fiscal policy (still being debated in D.C.) vs. monetary policy.

As we’ve noted previously, the COVID-19 shock has been global, and is likely to extend (U.S./China relations have been affected, as have China/Hong Kong issues, euro-area politics, U.S. state budgets, and the November U.S. election). Any resumption of activity, helped by govt transfers, will look like a “V” for a short period. Indeed, PMIs are bouncing around the world. But it will be difficult to get back to 2019 levels of GDP in a socially-distanced world, and we are still digesting that demand destruction.

Bottom line: stubborn claims data w/w as well as paused re-openings suggest that while fiscal policy has patched the income gap over the past several months, more is likely necessary. In 2021, the consensus for U.S. disposable income growth is +2.6%, on top of growth in 2020 due to the fiscal patch. That’s a high bar, if there are still missing jobs.
Source: First Trust 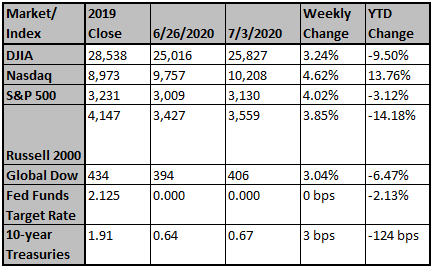 The U.S. housing market has shown signs of recovery despite the coronavirus pandemic, with demand appearing to outstrip supply with inventory remaining tight. Pending home sales -a measur...

European stocks were set to break a four-session win streak on Friday, with upbeat economic data overshadowed by persistent worries about rising virus cases in the U.S. That is as a holid...