The equity markets, following three consecutive weekly gains, declined last week as concerns relating to trade, Federal Reserve policies and oil supplies weighed on market sentiment. The Russell 2000® Index fell 1.17%; losses for the other indices included the Dow Jones Industrial Average (-1.05%), Nasdaq (‑0.72%) and S&P 500® (-0.51%). The week began with news of drone attacks, purportedly by Iran, on Saudi Arabia’s production facilities; the impact on production, 5.7 million barrels per day, was larger than the loss of Kuwait’s production in 1990. Early estimates from Saudi Arabia officials anticipate timely restoration of 70% of lost production; other sources, though, indicate that repairs could take weeks or months. In the meantime, Saudi Arabia is fulfilling delivery commitments by drawing down reserves and buying oil. Oil prices soared 14.7% on Monday, the largest increase since 2009. Oil prices declined from the Monday highs for a weekly gain of 6.7%; the attack focused attention on the geopolitical risk to world oil supplies.

On Wednesday, the Fed, as expected, reduced interest rates by 25 basis points; the vote, though, was not unanimous as two members voted for no change while one wanted a 50 basis point reduction. Chairman Powell left the door open for further rate cuts, as needed, in response to trade-policy uncertainties. Elsewhere, the United Auto Workers initiated a strike at General Motors, the company’s first labor dispute since 2007. The UAW is seeking higher wages and a rollback of some previous concessions made during the financial crisis. The impact of the strike, and the continued suspension of Boeing’s 737 Max production, will weigh on manufacturing output. The Organization for Economic Co-operation and Development (OECD) cited trade tensions and political uncertainties in cutting its 2019 global growth forecast from 3.2% to 2.9%.

This week, U.S. and Chinese officials met in Washington D.C. in preparation for the October resumption of trade discussions. Various reports suggested the meeting, however productive, ended early as the Chinese delegation cancelled a trip to Montana and Nebraska. Then, on Friday, President Trump held a news conference in which he moved away from last week’s suggestion of an “interim deal”; today, he stated that he was “looking for a complete deal . . . not . . . a partial deal.” The markets quickly declined on the news. Trade-related headlines continue to drive not only the markets but also Fed sentiment and investor strategies. Earnings season is still three weeks away; so, in the meantime, trade headlines will likely continue to determine market momentum. 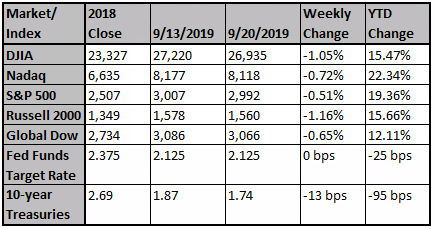 Time for the US and China to return to 'serious communica...

The U.S. and China must work closely to reach a trade deal as their bilateral dispute has a global impact, said China's former vice finance minister on Monday.

The Saudi Oil Shock: Who Wins, Who Loses