Trade is still the tail that wags the Dog

Positive trade-related commentary from the U.S. and China provided momentum as markets rebounded from oversold conditions for many cyclical stocks. The Russell 2000® Index rose 4.85%, its best weekly gain since 2016. The Dow Jones Industrial Average (1.57%), the S&P 500® Index (0.96%) and the Nasdaq (0.91%) were also positive for last week. Some analysts note that a trade deal might provide a greater upside for value stocks over growth stocks; indeed, this week’s gains in the Russell 2000® suggest that a shift toward value may be developing.

U.S. and Chinese trade officials softened their rhetoric as both sides appear eager to solve the trade disputes. China eased tariffs on several products, such as lubricating oils and alfalfa, used in manufacturing; President Trump then delayed for two weeks tariff increases scheduled to take effect on October 1st and, on Friday, China cancelled planned tariff increases on pork, soybeans and other agricultural products. The thaw might lead to an interim or “mini” agreement this fall as face to face talks are set to resume in Washington. Both economies are under pressure as President Trump faces re-election and President Xi seeks to avoid conflict as Beijing celebrates the 70th anniversary of the Chinese Revolution next month.

De-escalation of US/China trade tensions is one thing (and a good thing). This is happening. Talking is better than not talking. But that is different from a full deal. The U.S./China disagreement is still looking more “cold war”-like, versus financial-crisis-like.

The chain of events that we continue to be worried about is: 1) trade & other uncertainties matter for global manufacturing; 2) manufacturing matters for corporate profits (even though it is a small share of economies like the U.S.); and 3) corporate profits are the leading indicator of future employment growth & capital spending. This chain will continue to impact the economy going forward.

This week, the Federal Reserve is widely expected to announce another interest rate cut as tariffs pressure U.S. economic growth. The European Central Bank announced a further rate cut on Thursday and resumption of its bond buying program to stimulate eurozone economies. Recent ECB policies have not yet encouraged lending or inflation as banks have instead raised lending rates to compensate for lost revenue on negative interest rates. Inflation remains significantly below the ECB’s 2% target.

The apparent shift in investor sentiment from growth to value may explain the weak response to the much-anticipated WeWork IPO as investors seem highly skeptical of its proposed valuation and corporate governance. The company responded with revisions to its corporate governance; also, a major shareholder, SoftBank, committed to buy $750 million of the IPO as WeWork reduced its valuation assumptions. Third quarter earnings are still a month away; even so, sell side investor conferences are providing an early read on company outlooks. Generally, commentaries have been positive-yet-guarded based on lingering trade issues. Economic expansion continues and consumer spending reflects an optimistic outlook. The markets’ impressive recovery from the August selloff, and the expectation of an interest rate cut, seem to have shifted investor sentiment. 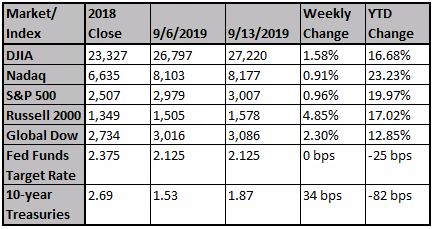 Attacks In Saudi Arabia Change The Game For The Oil Marke...

Despite Brexit, the UK is even more dominant in currency ...

Britain is increasing its lead over New York and other global centers in $6.6 trillion-per-day market for currency trading.