Equity markets continued to rally last week as the U.S. and China announced plans to meet again in early October. The S&P 500® Index (1.79%) led the major indices, followed by Nasdaq (1.76%), Dow Jones Industrial Average (1.49%) and the Russell 2000® Index (0.69%). New tariffs went into effect on September 1st; and the markets, in the absence of progress in trade negotiations, reacted negatively. Also, the release of the July ISM Manufacturing Index, which fell below 50 for the first time since January 2016, signaled a contraction in an important portion of the economy. Market sentiment then turned more positive as tensions in Hong Kong eased somewhat with the withdrawal of the proposed extradition bill, and the release of several favorable economic indicators. The ISM Non-Manufacturing Index reported higher-than-expected expansion of the service economy while payroll processing company ADP reported 190,000 new jobs compared to estimates of 150,000. Although Friday’s Department of Labor’s August jobs report disappointed, the unemployment rate was unchanged and hourly wages rose modestly. The results reinforce analysts’ expectations for another 25 basis point interest rate reduction by Federal Reserve at its September 17-18 meeting.

The ebbs and flows of Brexit continue; on Friday, Parliament approved a bill aimed to prevent a no-deal Brexit; the bill may force Prime Minister Boris Johnson to request, on October 19th, a Brexit extension until January 31, 2020. Opposition parties vowed to vote against Johnson’s call for a snap election on October 17th. Several scenarios, though, might permit the Prime Minister to avoid requesting an extension from the European Union; to further complicate matters, the EU might not agree or might ask for a different departure date. Stay tuned. Meanwhile, trade issues and monetary policies by central banks continue to dominate market headlines in the U.S., Europe, Japan and China.

Several companies have recently reported significant insider buying activity; one clothing manufacturer executive with significant revenues from activities in the U.S., Europe and Asia bought 133,000 shares of stock ($9.974M) following the company’s earnings release. These corporate executives believe their companies’ stock prices are oversold; also, they are perhaps more upbeat about the prospects for the economy and a settlement of the trade disputes. The markets’ gains last week suggest that investors believe that accommodative monetary policies and progress towards a trade truce will lead to global economic expansion, and continued momentum in the equity markets. September may also include corporate announcements in advance of third quarter earnings. 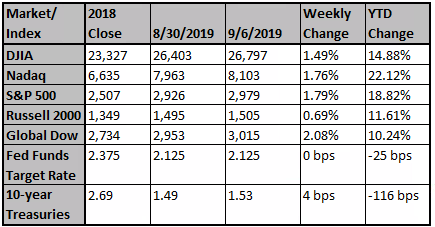 A series of fresh stimulus from the PBOC and the Fed may push the stocks to a new high...

CNBC's Jim Cramer: 'The Only People Talking About a Reces...

Have you noticed all the talk recently by the mainstream media about a recession? Of course, many members of the MSM can barely contain their glee at...