Trade and Fed Rate cuts still in question! Deals on both need to be made to move forward

The equity markets rebounded last week to close the month on a positive note.   The Dow Jones Industrial Average (3.02%) led the major indices, followed by the S&P 500® Index (2.79%), Nasdaq (2.72%) and Russell 2000® Index (2.42%).  Commentary from the U.S. and China seemed to suggest that both sides want to continue trade discussions; the previously scheduled September meeting has not been canceled.  Also, China has not responded to the latest tariff increases from the U.S.; and China also eased some of its earlier auto import restrictions.  China trade issues are not likely to be resolved any time soon. Economic pressure is ratcheting up, but both sides have little incentive to resolve the issues. China has been arguing that it is making progress on fentanyl, but US negotiators see little progress on an issue that is smaller than the larger issues of IP and trade balances that need to be resolved.

Other factors effecting the markets last week are indications that Europeans are buying U.S. fixed income and equities as a favorable alternative to negative interest rates in Europe and the unknown consequences of Brexit.  The yield curve remains inverted. The amount of negative yielding debt in the world has risen. The fed funds rate looks (very) high relative to other global interest rates.  We’ve likened this to holding your breath under water. The Fed is running out of time, not bullets, in our opinion. In this vulnerable position, action should happen sooner vs. later. If the curve is inverted & credit spreads widen, the economy will almost certainly slow further. Near the zero bound on rates, there’s a case for quicker action.

The run on U.S. Treasuries continued last week. The Fed should let investors have as many Treasuries as they want, but adjust interest rates to a low enough level where the run stops. We are aware of the pushback from some former Fed members, including the op-ed by Bill Dudley, suggesting the Fed should be stubborn here. But the Fed is not alone in the world. Other central banks are cutting and/or are likely to cut in 2019. If the Fed does not get on the same path, there will likely be a considerable tightening of U.S. financial conditions (which has already started with the US$ this year). Why take this risk with inflation & inflation expectations low?

Prime Minister Boris Johnson secured from the Queen an order to “prorogue” or suspend the UK Parliament; the unusual action, intended to limit the influence of Members of Parliament in the run-up to Brexit, will suspend Parliament from September 9th or 12th until October 14th.  The action may thwart a challenge by those opposed to leaving the EU.  It may also enhance the Prime Minister’s negotiating position with the EU as the odds of a no-deal Brexit increase.  The EU spokesperson commented on its “willingness to work 24/7 throughout this long process.”   Investors will watch closely to monitor any progress.

During August, all of the major sectors in the S&P 500®, with the exception of Real Estate, Utilities and Consumer Staples, posted losses.  Energy (-8.8%) and Financials (-5.7%) were hardest hit.  Looking ahead, trade issues, and expectations for third quarter earnings, will likely provide market momentum.  At this point, any slowdown in economic growth will keep the recession speculations alive.  Volatility will likely remain elevated until headline news (that is, trade negotiations and Brexit) provide relief. 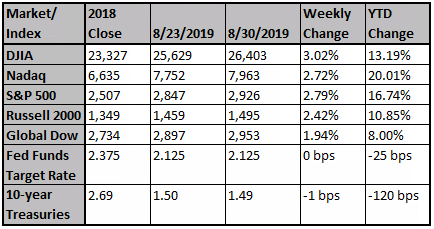 Job growth is the highest in these 5 US cities

The U.S. labor market continues to remain a bright spot in the economy, with employers shrugging off mounting fears of a global growth slowdown. In August, job openings in the U.S. remain...

It's time American farmers move Beyond China. This is their chance.