The natives are starting to get restless

Markets were up again last week as we are making our way out the other side of the Pandemic. Every day that goes by is another day we are closer to getting back to our normal lives. You may have noticed a pickup in protests from Americans wanting to go back to work. As we watched the curve flatten and numbers come down for new cases and and new breakouts of the Coronavirus, the federal government rolled out its plan to reopen the economy in phases. The plan looks like it is comprehensive and will take its cues from the medical data currently being followed by all states and from monitoring for any particular breakout hot spots.

Approximately 50 percent of states are in a position to open up as soon as this week. Over the last few days, we have noticed a trend of social unrest as some states have initiated restrictions that some people think go a step too far. Michigan is a good example where new rules make it ok to kayak and go out in your row boat, but do not think of taking your fishing pole with you because fishing has been ruled to be hazardous to your health. As we move forward, it is going to be harder to lock down the American Worker.

Further, we now have enough information to tell us who is most vulnerable to the virus, and it is just as we have been told from the beginning. Those over age 65 and those with health conditions must take extra precautions because they are the most vulnerable. This data has many Americans starting to question the rationale of locking down our entire economy when less than 20% of Americans are at great risk. The question many working Americans are asking themselves is, “Would I rather possibly get sick (or worse) for two weeks or be poverty stricken for the rest of my life”? People are starting to feel like their Government has taken their livelihood away from them without giving them any say in the matter.

With the numbers coming down to more manageable levels and the Federal Government releasing guidelines to open things back up, all eyes are on state and local officials to get things moving again. We think it will be much harder to contain and keep people socially distanced as they see their financial security and lifelong dreams slip away from them. Pressure will start to increase on local and state officials to follow the data and get their economies up and running as quickly as possible.

It is our belief that the Markets are moving up in anticipation of us getting back to work. We are in uncharted waters here and hopeful that our towns and cities will open for business in the near future. Some states may take more time to get up and running like New York and New Jersey, but many are ready to get back to business now. We think we will see good movement in opening things up this week but it is important to be mindful of the data along the way.

As we begin to consider and plan for the re-opening of the economy, one persistent question for many investors is whether or not March 23, 2020 was the bottom of the market. The answer is we do not know, and we will only know once history shows that we have moved passed the recession. However, there is a substantial amount of historical data that shows the market typically is well into a bull market rally when a recession finally bottoms. We read this note in JP Morgan's "Eye on the Market:" 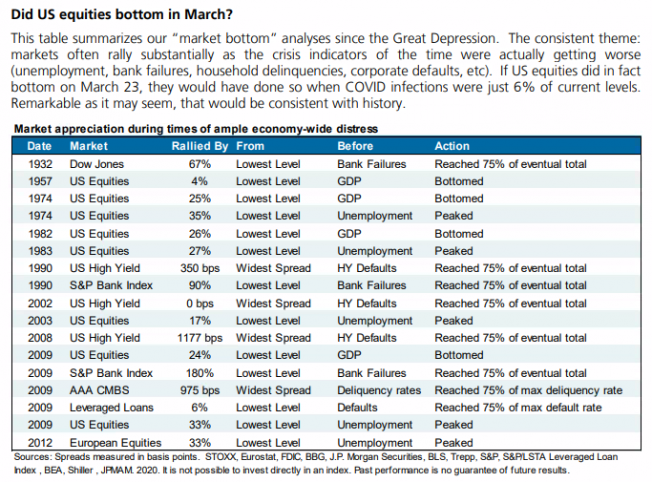 While we cannot with certainty say that March 23, 2020 was the bottom of the market, we do believe there is ample evidence to suggest investors should be wary of timing the market.

Please call or email with any questions. 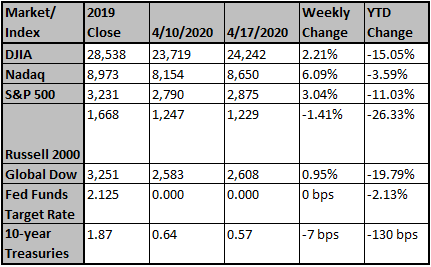