As investors continue to climb the wall of worry, we believe that the bar is set low for an upside surprise in the markets later this year. Stocks advanced last week as investor confidence in the economic and corporate outlook improved.  Lower-than-expected CPI (Inflation) and PPI (Producer Price Index) numbers,  combined with last week’s report of modest wage growth, eased inflationary concerns.  And, first quarter earnings season continued to outpace analysts’ estimates (more on this below).  Geopolitical news dominated headlines; President Trump announced his decision to withdraw from the Iran nuclear deal and re-impose economic sanctions on the country.  The relatively muted reaction indicated that the market largely anticipated the outcome.  Crude oil prices continued to rally; some analysts believe restrictions on Iranian oil exports could push prices towards $100 per barrel.  Likewise, Energy stocks outperformed; since the end of March, the S&P Energy sector’s 13.8% gain is significantly outpacing the broader index’s 3.3% return.  NAFTA and U.S.-China trade discussions continue.  The Chinese trade delegation arrives in Washington next Tuesday for a second round of trade talks; the meeting takes place shortly before President Trump’s May 21st deadline for a recommended list of tariffs.  Investors, though, seem to anticipate that parties will avoid a trade war with China and ultimately find a resolution on NAFTA.  Finally, the White House announced June 12th as the date, and Singapore as the location, for President Trump’s upcoming meeting with North Korea’s Kim Jong Un.

Earnings season is nearing an end; over 90% of companies in the S&P 500? Index have reported first quarter results.  To date, overall sales have increased 8.6%; sector results were led by Materials (+22.4%); Information Technology (+15.8%); and Energy (+14.4%).  Overall earnings per share have increased 25.6%, including Energy (+95.0%); Materials (+44.1%); and Financials (+29.6%).  The impressive earnings growth effectively reduced the S&P 500? Index’s P/E ratio to 17.2x, a 10.4% decline from its January high of 19.2x.  Volatility has also moderated; the CBOE volatility index is down more than 35% since the end of March.  Meanwhile, according to a recent Wall Street Journal survey, over 92% of economists polled expect the current economic expansion to continue at least into 2020.  Following declines in February and March, and lackluster performance April, stocks have rebounded thus far in May.  The combination of strong corporate earnings results, relatively cheaper market valuations, moderate volatility, and a favorable medium-term economic outlook should enable the recent rally in stocks to continue. 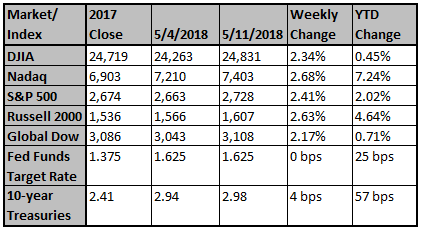 Gas Is Headed for $3. What That Means for the U.S. Economy

Drivers gearing up for trips this summer face escalating prices at the gasoline pump, an early sign that $70-a-barrel oil is starting to reach into consumers' wallets.
Read Story

High-tech company is center stage in the US-China trade f...

China Should Do What Trump Says on Trade

Many of the reforms demanded by the U.S. would help the economy.
Read Story