THE SEPTEMBER TO REMEMBER (AND POSSIBLY OCTOBER AND NOVEMBER)

Good morning. We hope everyone is enjoying their summer. With the summer coming to a close, we see a growing number of client questions on policy issues impacting financial markets. Below we outline the latest state of play on the bipartisan infrastructure package, the $3.5 trillion spending budget and legislation, a potential government shutdown, the debt ceiling, and the reappointment of Fed Chairman Jay Powell.

The recent news from Afghanistan, notwithstanding its geopolitical implications, sets the background for what appears to be a confluence of fiscal and monetary decisions that need to be made in a short timeframe this Fall. President Biden’s approval ratings went underwater over the weekend.

Biden’s political capital started falling before Afghanistan and was driven by the rise in inflation and the recent wave of COVID. The Afghanistan withdrawal is compounding these more structural headwinds to Biden’s political capital. As such, House and Senate leadership is pushing for expedited passage of $4 trillion in new spending and more than $1.5 trillion of tax increases by October 1st all while trying to prevent a government shutdown and raise the debt ceiling. It is hard to overstate how much the policy agenda will take over in the coming weeks.

Despite pressure building among FOMC members, the Fed decided not to announce a tapering of asset purchases on the eve of a major fiscal showdown at its September 2013 meeting (keep this mind as you think about the current tapering schedule). Ultimately, the US government went into a shutdown on October 1st. Investors began to price in more risk of a US default given the lack of political consensus on the budget for the next weeks. The rollout of the ACA exchanges was a complete disaster at the same time.

The Fed held an emergency video conference meeting on October 16th to discuss its response should the US government default. This turned out to be a lagging indicator as public pressure built so much to re-open the government, it created the pressure to also raise the debt ceiling. We needed a government shutdown to create the political will for the debt ceiling increase, something that should be useful in thinking through the current scenarios. The agreement also paved the way to relax some of the planned austerity by setting up a new budget process. The Fed did not announce its taper at its late October meeting and ultimately announced the tapering in December.

There are some important differences this time around as no two situations are the same: 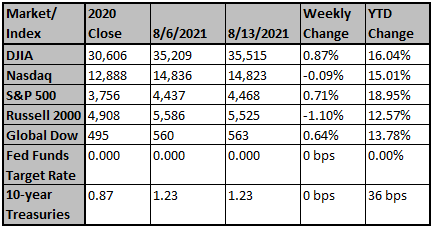 The price of iron ore has fallen roughly 40% since mid-July on concerns about demand from China, dealing a blow to producing countries such as Australia and Brazil that are battling to pr...

Remote Work May Last for Two Years, Worrying Some Bosses

The longer that Covid-19 keeps people home, the harder it may be to get them back to offices, executives say.

Why You Can't Find Everything You Want at Grocery Stores

New supply problems appear weekly, driven by shortages of labor and raw materials, and some food companies anticipate disruptions into 2022.